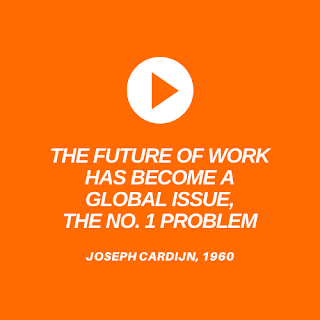 "Today, the future of work has become a global problem, the No. 1 problem, one might say.

It is increasingly becoming so: through the perfecting of new labour processes, which have spread rapidly in every country and among all races;

through the growing number of wage workers, both young and adult – and particularly women and young girls – in all sectors of professional life (production, trade, finance, administration, teaching, transport, publicity);

through the power of new technologies which overcome all obstacles and thus transform the face of continents as well as the life of peoples;

through scientific, social and ultimately philosophical problems that have led to this evolution, through which man increasingly masters matter at the risk of allowing himself to become dominated by it."